For the past few years, I've decided to stop learning new UI frameworks and to make all my user interfaces using HTML5. Making user interfaces is HARD. The idea that I should constantly throw away my old UI code and rewrite things in scratch every few years using new, half-baked UI frameworks is preposterous. It takes ages to learn the ins and outs of a UI framework and figure out how to  get the behaviour "just right." Why would I want to discard code that works perfectly well and which I spent ages fine-tuning and replace it with new code based on a new, buggy UI framework? Since I do all my coding in Java, I went and ported GWT Elemental to JavaFx so that I could use HTML5 in my UIs from my Java code. I can now take my same UI code and reuse it on websites, on desktop applications, and for mobile UIs.

In the past, I've found using HTML for user interfaces to be problematic. HTML has traditionally used a word processor layout model. There's a central flow of text, and you can position pictures and other elements to the sides of the text. HTML really wants you to lay things out this way. If you try to do something different, you end up really fighting against the layout model and causing yourself grief. The standard components of a desktop UI -- widgets and toolbars that dock on the sides and status bars on the bottom -- really doesn't fit in well with HTML layouts.

Despite all these major deficiencies in using HTML for traditional UIs (and I'm sure there's many more too), HTML does have many advantages over other UI frameworks.
So given that we want to use HTML for a traditional UI, how do we go about doing it? In the last few years, the layout options available using HTML and CSS have improved dramatically with endless new features that cater to people designing UIs as opposed to word processor print layouts. With all of these features though, it has taken me a while to figure out how to use those options to make a traditional looking UI. Here are some of the tricks that I've used.

The first thing is to make sure to zero out the margin, padding, and borders of all your html, body, div, and span elements. In the past, it was also necessary to set the height and width of the html and body elements to 100%, but I don't think that's necessary any more. I also don't think it's necessary to add "position: absolute;" or "position: relative" on the html and body elements any more. This is all necessary so that you can accurately stick things in the corners and sides of the page using absolute positioning. In a word processor layout, you want to have a margin on the sides, but in a proper UI, you want to have toolbars and menus there.

In the past, it was important to avoid using pixels for positioning because people with poor eyesight would increase the font size to make things easier to read. Most designers couldn't handle this, so the modern approach is to use pixel positioning, but let users with poor eyesight adjust what the size of a pixel is. I'm a traditionalist though, and I still try to use layouts based on font size where possible while resorting to pixel sizes when I actually need containers that hold images with a known pixel size. HTML5 now has new measurement units that make laying out resizable things easier.

The "rem" unit is the width of an "M" character on the body element. You can lay things out based on how many characters should fit in a certain area. Unlike the old "em" unit, which is the width of an "M" for the current element, you don't have to worry that you might be nested inside another element that changed the size of the font or something.

Similar to the "rem" unit, HTML5 also has the new measurement units "vw" and "vh", which express things in terms of percentage of the viewport width and height (i.e. width and height of the browser window). If you want your UI to resize when you resize the browser, then you need to express things in terms of percentages. Unfortunately, the old "%" unit was always a little confusing because it sized things in terms of percentage of the parent (and sometimes, it was not of the parent but of the first relatively or absolutely positioned parent). Often, you need to position div elements inside other div elements to get the right layouts, but you still wanted things to resize globally, so using "vw" and "vh" units lets you do that. There's even a "vmin" unit that's useful for making elements that have a certain ratio of height to width but that still resizes when you resize the browser. I suspect that "vw" and "vh" units might have similar problems to "%" when using things for widths. Sometimes, when you set two things with a width of "50%" beside each other, the actual size in pixels might be something like 500.5, and the browser might round those values up or down, meaning the final width might leave an extra pixel somewhere or it might overflow the width of the browser. I think modern browsers actual use floating point numbers for sizes and are a bit more generous about half pixels at the edge of the screen because I haven't had an issue with things like that in a while. There's also a "vmax" unit. That unit might be useful for scaling images when used in combination with max-width and max-height. I haven't had an occasion to use it yet though.

Using physical units like inches and picas are still ill-advised, I think. In the past, there was an issue where some browser makers would actually use real units there. So if you said you wanted something to be one inch, but you were using a 60inch TV, the browser would actually make your element only a few pixels wide because that was what one inch was on a large TV (whereas on a tiny mobile phone, one inch might be half the screen). I think most browsers just set one inch to be 96 "pixels" now, but if that's the case, you might as well just use pixels directly for sizing things.

Once you have your units figured out, you need to a way to stick things in different places in the window in order to make a traditional UI. To do that, you can use "position: fixed" or "position: absolute". 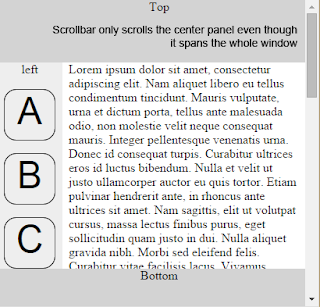 In the past, Apple sabotaged fixed positioning because the iPhone wouldn't follow it, but modern iPhones do behave properly now. I just find absolute positioning to be more flexible and easier to use though. If your UI has a central resizable area, but some fixed sized things on the side, then you could possibly use fixed positioning. The scrollbars for the whole web page will only control the central area, but that might be what you want. When using a keyboard to control a UI, this is useful because using the the cursor keys to move around will always scroll the central area even if the keyboard focus is on one of the side panels. With absolute positioning, for example, your keyboard focus might be on a side panel when you first create your UI, so when the user tries using the cursor keys to scroll things, the central area won't scroll, contrary to their expectations. But this is fixable, so I'm not sure it's worth using "position: fixed" just for that. People might get confused by having the main scrollbar only control the central area too. 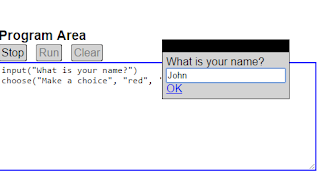 Absolute positioning is obviously useful for free-floating toolboxes and windows, but you can also use it in UIs to provide the functionality of a BorderLayout layout manager. You can easily create one expandable center area, with fixed sized components above, below, to the left, and to the right of it. Unlike fixed positioning, elements with absolute positioning can be nested, so any element or UI component can, in turn, use absolute positioning to layout out its internal elements using this border-style layout. HTML's absolute positioning is also limited because you have to specify sizes for the elements that you place on the sides. You can't let those components be laid out "naturally" and let the UI automatically figure out a natural width and height for them. You must explicitly give them a size.

To use absolute positioning properly in this way, you need to watch for some things: 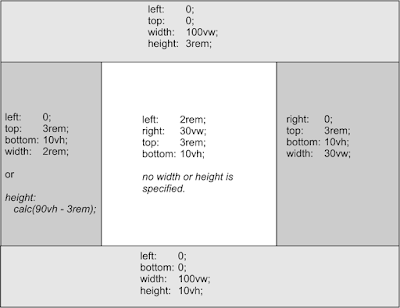 Recent web browsers also support new layout tools such as flexbox. Flexbox is nice because it lets you do some nice things like vertical centering, aligning elements, mixing of different measurement units and making some limited use of natural sizes of elements when doing layout. Unfortunately, there's a lot of knobs that you need to adjust to get the flexbox to work, and those knobs have confusing names so I always forget what they are and have to spend a lot of times looking things up every time I want to use a flex box.

I sometimes end up using flexbox layouts for really mundane things that should be easy in CSS, but that I always forget how to do, like making a line of boxes or a line of images. I always forget to set the vertical-align property on those boxes, so they end up being positioned inconsistently depending on what their contents are. Flexbox uses its own alignment rules, so you can avoid that whole mess.

In the future though, I'm eagerly awaiting the arrival of grid layouts to CSS. Although you can sort of do the same thing using tables, grid layouts should provide much more layout power than flexbox while reducing the amount of confusing HTML verbiage you need to write. With grid layouts, you can actually align things both horizontally and vertically! And you don't need to put elements in your HTML just to designate how things should be laid out. You just specify the different pieces of content you want in HTML, and then the CSS is used to position them in a grid. There's a bit of a concern that Apple has no desire to add support for grid layouts to Safari, but hopefully, they'll be swayed in time.
Posted by Ming at 4:13 PM 1 comment: