In my previous blog post, I mentioned that I was setting up some simulations to see if I could learn some insights into some of the proposals for downtown relief lines for Toronto. I've now finished running the simulations. 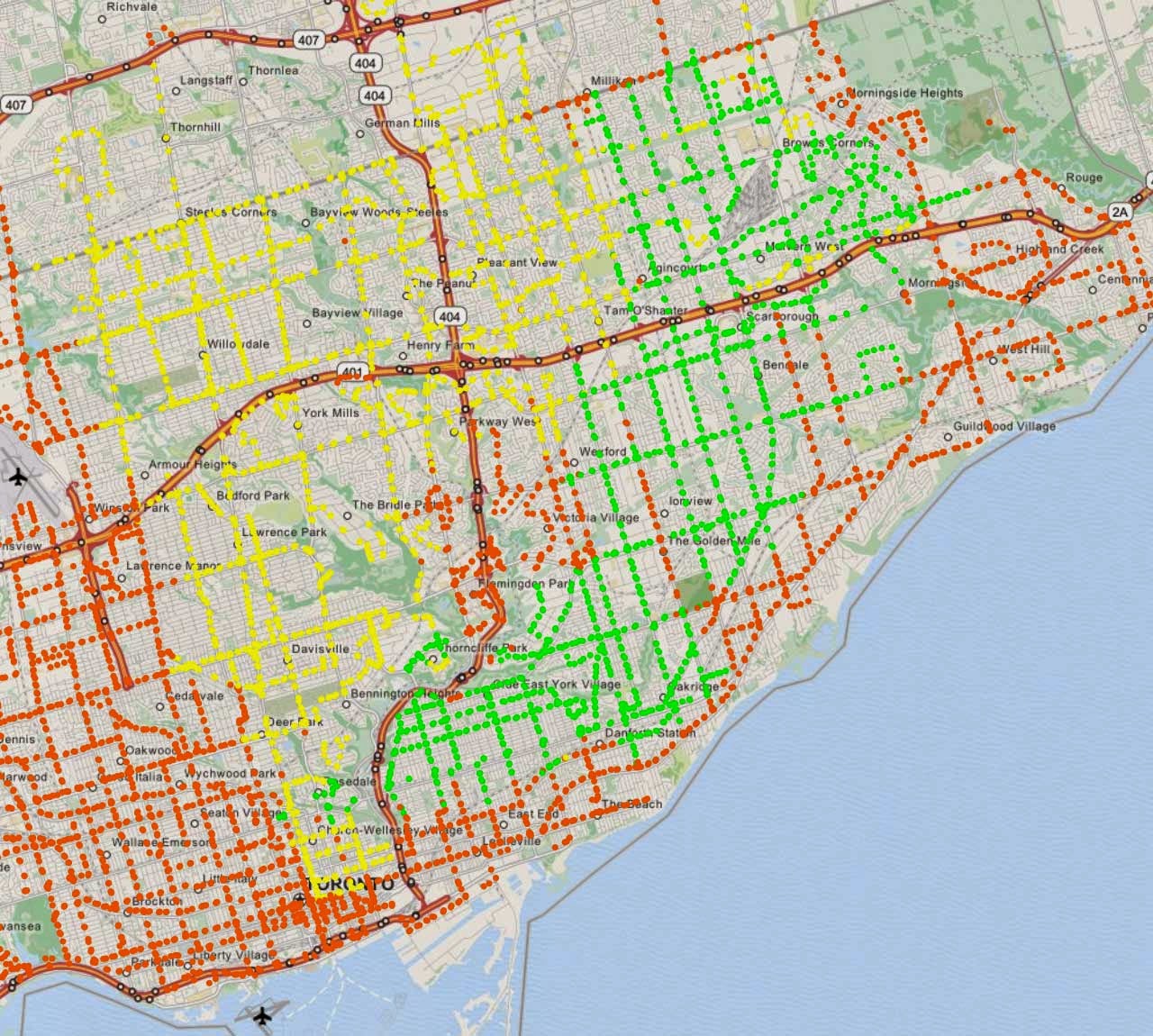 For the downtown relief line, I modeled the shortest possible line. It runs from Danforth and Pape southwards, then travels west until it hits Wellington and Bay. The simulation assumes six minute headways. Although the DRL will probably come less often than the Yonge subway, it is expected that people who would normally take the Bloor subway and then transfer onto the Yonge subway will prefer to take the DRL because it will be slightly faster due it having fewer stops than the Yonge subway. It will also be less crowded. As can be seen from the simulation results, the DRL does seem like it can intercept people who ride the Bloor subway to the financial district and redirect them away from the Yonge subway. Pretty much all the green dots become orange. 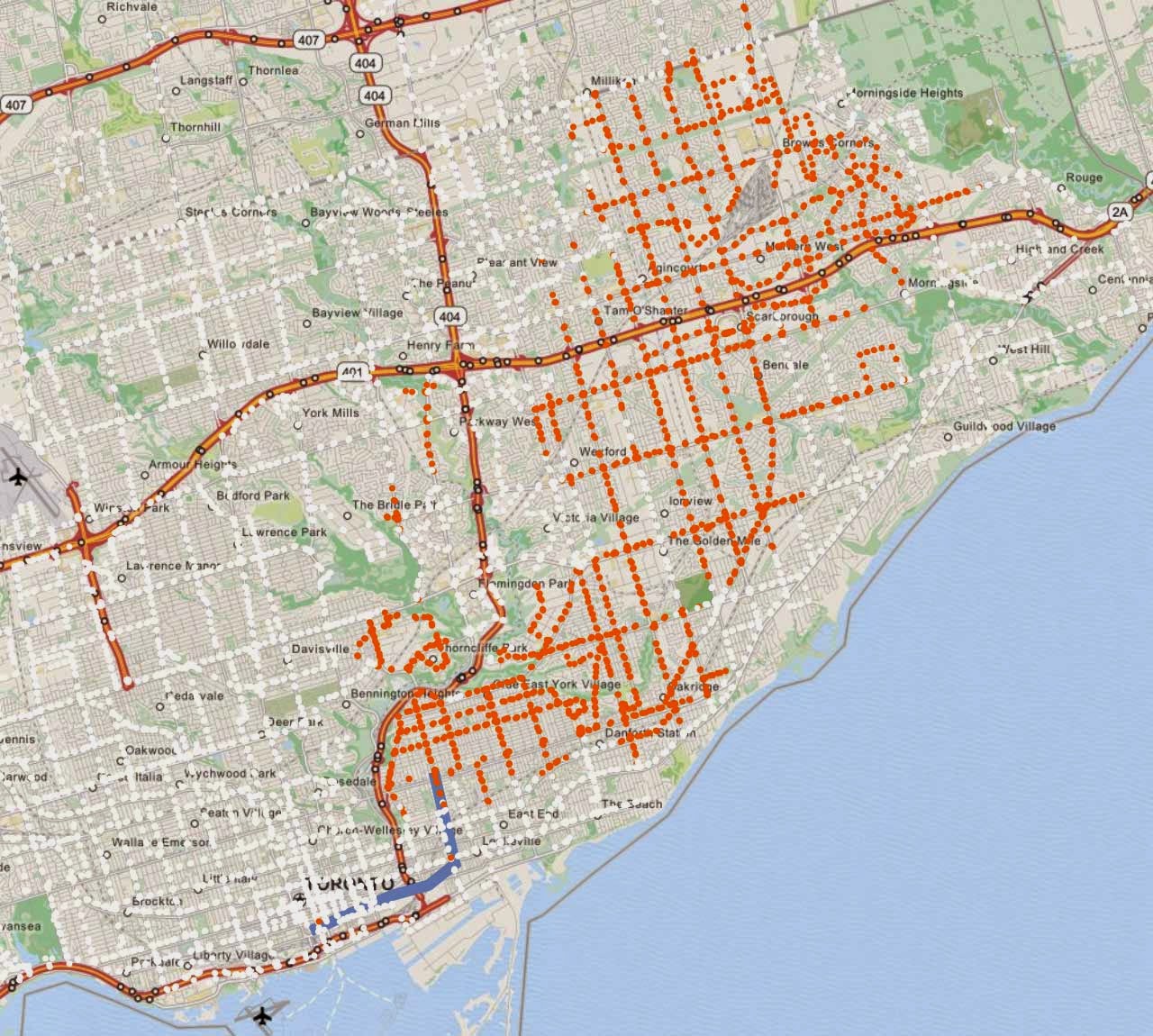 The provincial government has recently expressed an interest in upgrading its GO train service to a faster and more frequent regional express rail service. It seems that they are looking primarily at upgrading the Lakeshore and Weston lines initially. In theory, the provincial government has been working on this plan for more than a decade already, but they've recently implied that they're going to prioritize this improvement much higher than before. I modeled this improvement by taking the existing schedule of the Lakeshore GO train line and adding new trips so that it would come every 15 minutes instead of every 30 minutes like it currently does. The simulation shows that increased frequency of the Lakeshore line won't draw any riders away from the Yonge subway line. This might be due to a limitation of the simulation. With more frequent Lakeshore GO train service, the TTC might offer more frequent and better bus connections to the Lakeshore line's stations, which might alter the simulations results somewhat. 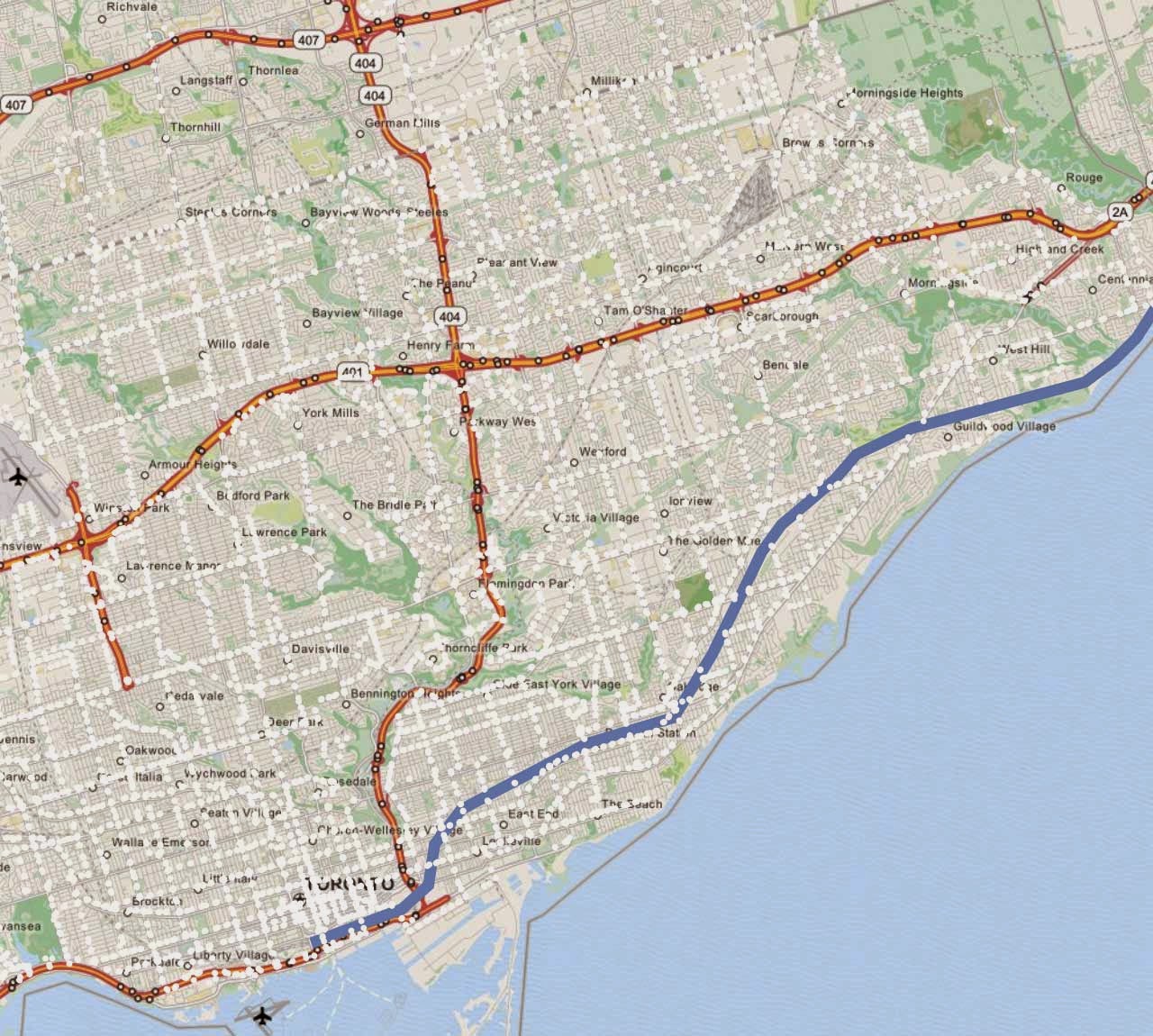 The provincial government could potentially build a regional express rail on the Stouffville GO train line. I think this is unlikely because it requires double-tracking and other expensive track upgrades. Despite many small improvements to this track by previous governments over the years, I don't think any accommodation was made to make it easy to upgrade to a much higher capacity line. Also, current ridership on this line is poor, so it would be hard to justify increased frequency on the line. I modeled this improvement by taking the schedule of the Stouffville GO train line and adding new trips so that it would come every 15 minutes. The simulation results show that anyone who normally rides down to Kennedy station to take the Bloor subway to downtown would benefit from upgrading the Stouffville line to a regional express rail. One effect that I did not model was that of a possible extension of the Bloor subway to Sheppard. This change might affect the relative benefits of taking the subway vs. taking a less frequent regional train line, causing people to still prefer taking the subway. 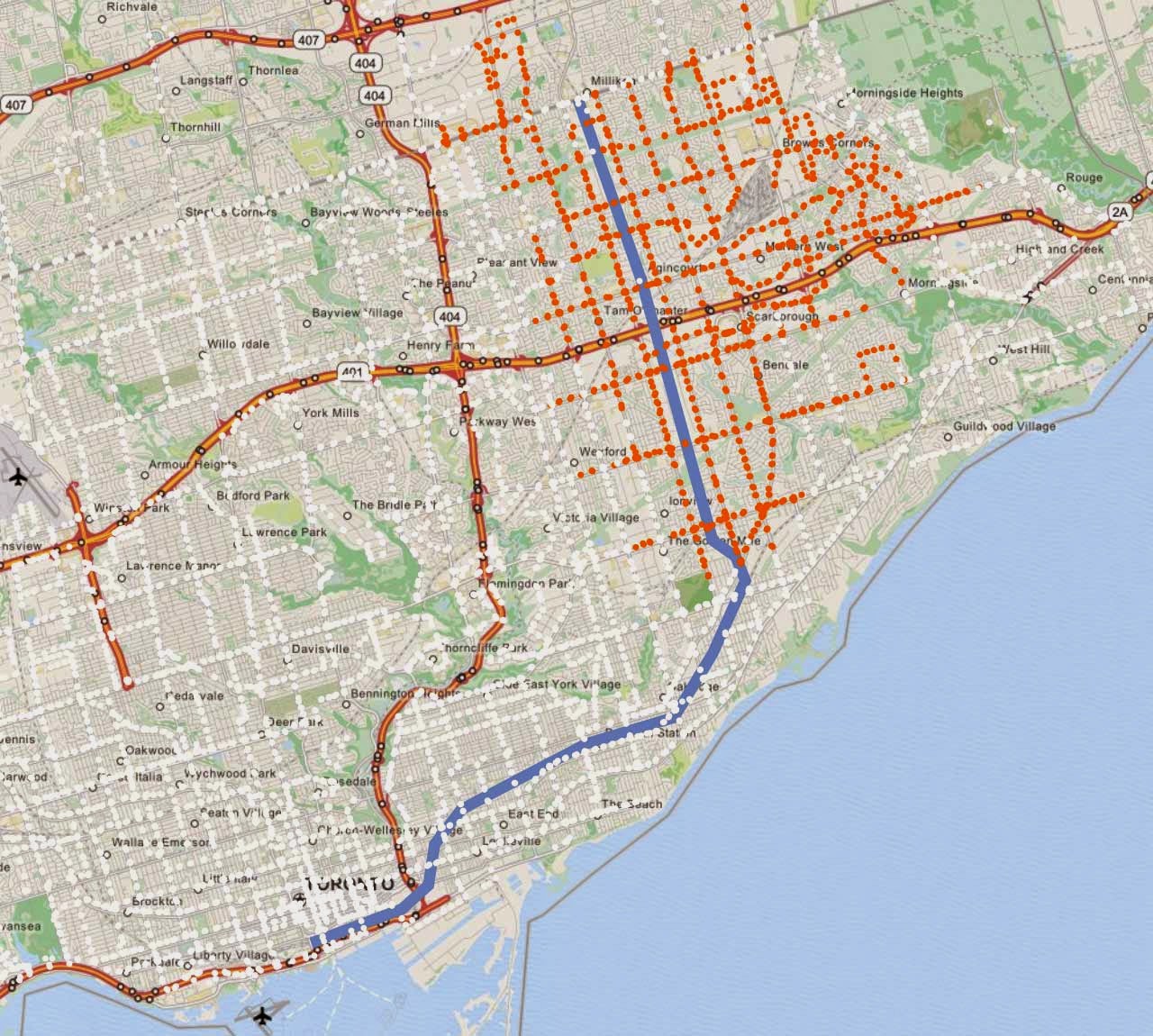 I don't quite understand the SmartTrack plan, so I wasn't sure how to model it. It's probably best understood as being equivalent to the Regional Express Rail - Stouffville plan shown above. Although the plan does seem very intriguing, I'm not actually sure it's within the power of the City of Toronto to actually build it. The plan seems to involve convincing the federal and provincial governments to pay for upgrades to a provincial regional train service that runs on track owned by private companies. I don't really see how the City of Toronto would have any power to actually get the thing built. The plan is also premised on the idea that there is room to add large numbers of trains onto existing track running through the city. It's not clear if that's actually the case. Those lines might already be packed with other trains. The province has already expressed an interest in building a new downtown train station or new downtown train tunnels due to bottlenecks in moving trains through downtown. And running frequent local train service through the city would impede fast, frequent regional GO train service, so the province might not be willing to make that sacrifice. As far as I can tell, the SmartTrack plan might not involve building anything at all. One possible interpretation of the SmartTrack plan is that Toronto will do absolutely nothing for 10 years, wait for the provincial government to build a Regional Express Rail, and then the city will retroactively call the Regional Express Rail as being "SmartTrack."

One problem with all of these different plans is that politicians will end up arguing over them for years and nothing will get built. All of these plans do have a common element though in that they all probably require new train tunnels through downtown. One compromise might be to start building a tunnel through downtown as early as possible that can later be repurposed for a subway, regional express rail, SmartTrack or whatever once a final plan is agreed on in ten years time. The tunnel can run from near Exhibition (the possible second downtown train station) to just east of the Don Valley (where it could later be extended to the existing rail right of way or north as a DRL). Since a short tunnel is probably useless on its own, it can initially be outfitted for streetcar use, so that the tunnel could actually be used until the politicians secure funding for some bigger plan. 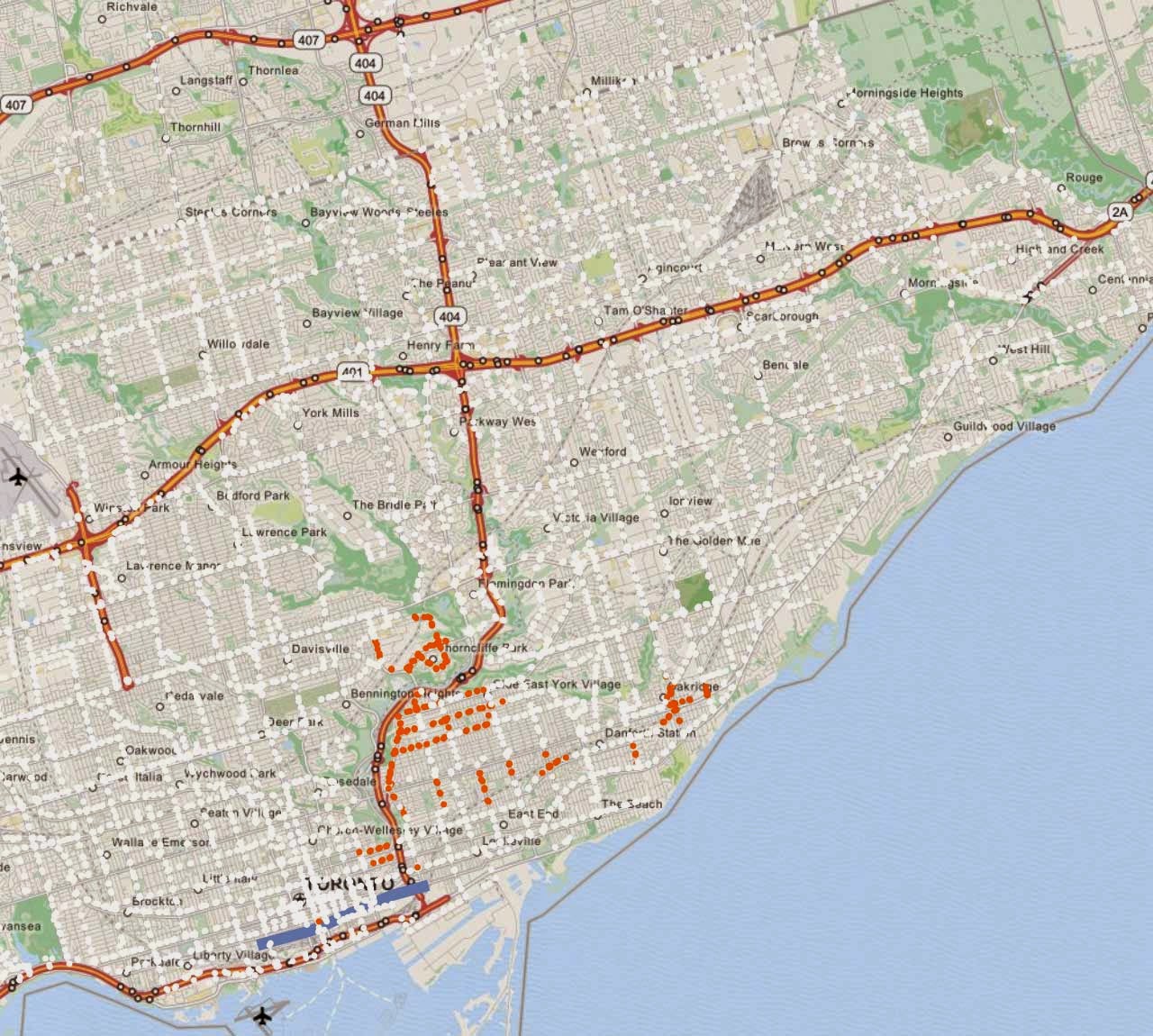