Setting up Simulations of the DRL

With all the talk this year of transit issues in Toronto and the importance of building some sort of downtown relief line (DRL), I thought I would try to grab some open data and see if it's possible for amateurs to gain some insight into the problem.

The current argument behind the downtown relief line is that most people want to go downtown for work. Also, the population of downtown is exploding in itself because both the millenial generation and the aging boomer generation are favouring the downtown lifestyle over the suburban lifestyle. This is supposedly causing a number of problems. The primary means for getting into downtown is the Yonge subway, and it's always full. It's so full that one of the main arguments against extending the subway system in the suburbs is that these extensions would simply feed more traffic onto the Yonge subway, which can't handle the additional load. Since the whole system relies on the Yonge subway line to move people into downtown, if there are any problems on that line (which happens often), the whole transit system grinds to a halt. There is very little redundancy in the system to provide riders with alternate ways to get downtown if the Yonge line has problems. A related problem is that the Bloor subway feeds riders onto the Yonge subway at the Bloor-Yonge station, and supposedly that station is also becoming a bottleneck in the system too in that it's becoming physically difficult to transfer all the people from the Bloor subway to the Yonge subway because there's just too many people. And then there's also a concern that the primary means of moving people east and west through downtown--the streetcar system--can no longer handle all the people who have now moved downtown. 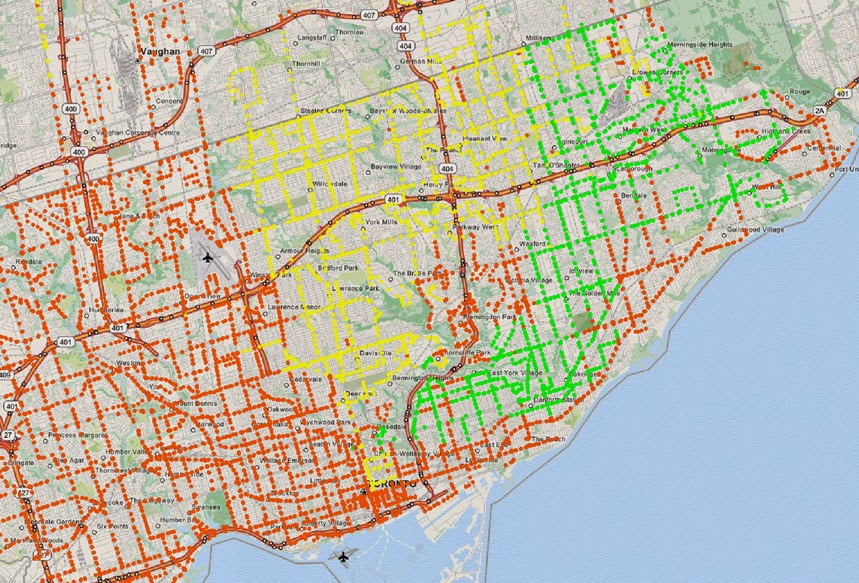 There's an area around the DVP where I think it's fastest to use express buses from the TTC or GO to get downtown rather than travel east or west to a subway line. Those also sporadic red spots in places around GO bus stations and GO train stations. These stations offer quick ways to get downtown, but they don't come often enough to make it worthwhile to take them if you need to get somewhere by a certain time unless you live really near to the stations.

Anyway, that's just a preliminary map of what I can calculate using the readily available transit schedule information. I'll later try plugging in some suggested DRL plans to see what effect they have on the map.